You can listen to two new songs - Charmer via rollingstone.com and Labrador (live) on Youtube.
If these are an indicator for the whole record, it will be a brilliant! 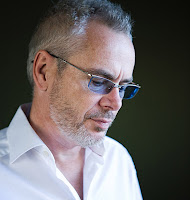 Air Traffic Controller is back with their second record NORDO - it is out now!

Let's go back in time: In November 2011 Air Traffic Controller raised 12.000 US$ on kickstarter.com for their second album NORDO. And I missed it. Damn.

Further back in time: Singer-songwriter Dave Munro, a real-life air traffic controller serving in the US Navy had written and recorded 4-track demos during his deployment.
He returned to his hometown Boston and founded the band ... Air Traffic Controller.
One of his demos reached singer-songwriter and producer Bleu. Everything fell into place resulting in a collective work on NORDO.

Now a few words about the songs: The upbeat, stomping playful Hurry Hurry - the first single from Nordo - opens the album and leads to the compelling If You Build It.
The floating Pick Me Up is predestined for a radio single. It's catchy like hell.
Already after my first listen to Blame I thought "this is one epic ballad" - the one ballad that can make a band famous all around the globe.
Any Way and Ready Or Not are melodic gems.
A Minute To Think is ... a minute to think. Yes, it's one minute of silence.
It's followed by the closing song Thinkin' Of You, which starts quiet and passes on to a playful finale.

I was a bit worried, NORDO could be one of these records you buy because of two or three songs that are really good, and at the moment you listen to the whole record you immediately get sobered. Then there's a phase of "Well, they might all be good but I have to listen more often". Finally you recognize they are not and the record finds its place in the shelf between all the other records and will be forgotten. And you'll hardly play it again because of your disappointment of the whole thing. Nordo is fortunately not this kind of record. Every song has its right to be part of it. There is on filler song. Great work ATC!

Highlights: Hurry Hurry, If You Build It, Pick Me Up, Blame, Ready Or Not

You can stream four songs from it at soundcloud:

One more thing: I'll repeat myself here but NORDO produced by the one and only Bleu!
Preorder it at Newburycomics.com - with an autographed booklet!
at June 25, 2012 No comments:

The second music video from Mike Viola’s Electro de Perfecto is out. Soundtrack Of My Summer is a quite surprising video… see for yourself:

Brandon Schott just released a new video - This Is Home is the 3rd single from his latest record 13 Satellites.

The Darkness? At PowerPopSquare? Yes. That's right.
I just love them for their reminiscence of Queen, AC/DC or Aerosmith. But The Darkness are more than just a band who brings back the past. Their music is fun. And that's why their records are still spinning at my turntable.

Their second LP One Way Ticket to Hell... and Back was released in 2005. After that there was really much trouble:
The band broke up. A new band which featured 3/4 of The Darkness (Ed Graham, Dan Hawkins and Richie Edwards) was created: Stone Gods. Justin Hawkins formed various projects: British Whale, Hot Leg etc. Everything seemed to fade away and to be over.

Seven long years later ... they are back!
(This is an interesting analogy to the album title of the second record, is it?) 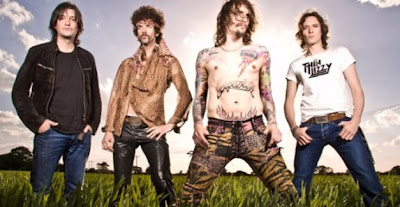