Along with the record release Mike Viola was so kind to give me an interview:

How Acousto De Perfecto did came about? 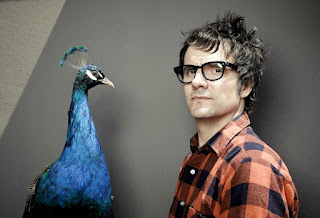 "This is my rock record" - "this is my live acoustic record with all new songs" - "this is my guy trapped in his basement far reaching swinging for the fences POP record" - this whole idea of Acousto De Perfecto kind of flies in the face of compartmentalization.
Confuses things.  Muddles the story.  But it's ultimately really satisfying to hear the Acousto De Perfecto immediately after the last track of Electro De Perfecto "When The Stars Are Against Me". It opens up the lifespan of the songs for me. For the idea the creator has for his creation. Not only Frankenstein, but the Son, the Bride, meets the Wolfman - maybe the new way of doing songs isn't some eternal flame "ultimate version" like any Beatles or Stones record.  But rather, an interpretation. I sound pedantic. Foolish.  See, if you think about these things too much you begin to put them in a compartment. Stupid humans. Off to the show!


Acousto De Perfecto spawned out of being on tour alone playing the songs from Electro De Perfecto. I didn't want to simply make a parallel record of all the songs on Electro De Perfecto done acoustic so I included some new material that I was gathering for whatever record of mine was coming next.
Secret Radio was written onstage live at a show in Charlotte NC. This guy, a fan of pop music was putting on a "pop fest". He paid all his favorite pop artists to come to NC, put them (us) up in hotels and rented out this hall. Maybe a gym at a college? Can't remember. Anyway. About 13 people showed up on a rainy Friday night. It was an utter failure. It spoke volumes about the distorted self-perception that fans of pop music have about their pop brethren. That's another story. An ugly long story. The story of Secret Radio is me singing to those 13 people. Explaining something in song. that they are the reason I try and try again. And always will. No matter how pathetic the numbers. I sing to the  people who lean forward and sometimes way too far back to hear the right melody, lyric, emotion wrapped up in a sexual midst that lies or lays somewhere between the girls in the train car in Hard Day's Night and the tattooed love boys. They mine their record collections for just one more surprise. A fix. Anyway... that song was a direct delivery from that haggard muse hanging in the stale air of that empty auditorium in Charlotte NC one cloudy summer night.

Why do you think vinyl LPs have this huge comeback particularly in the recent years?

Cause vinyl is better and people know that. CDs were an invention by manufacturers. SONY invented the CD player and the CD format. Then they bought Columbia records and forced vinyl out of existence. At least I think that's what happened. Anyway, the internet has come along and along with it main street America is coming back and so is vinyl.  It's always the corporations that fuck shit up for us little guys. CDs... never liked them. Walmart... don't shop there. I'd rather pay twice the amount for my chunk of cheese elsewhere.

How did you meet Bleu? Your cooperation with him and Ducky Carlisle (L.E.O., The Major Labels) were great efforts – is there a chance of anything more in the future?

I was doing these shows in Boston called "Mike Viola's mix tape". My friend Andrea Kremer introduced me to William James and told me we'd fall in love. She was right.  L.E.O. was all his idea. TML was the first and last band I've ever been in. It's highly unlikely we'll do another record. I died at the end of that one anyway.


Who was the last singer/band that took you by surprise?

Probably Rufus Wainwright. When he did Want One. I didn’t really get him before that record. Just didn't hear it. But that one knocked me out and then I went back and fell in love with his earlier stuff too.

Is the internet in summation good or bad for musicians/bands - in terms of file sharing, crowd funding, blogs and social networks?

It's great for me. Can't speak for everyone else. I love it cause if I hear about something that's supposed to be good I can immediately check it out, or buy it, or not. And for me as an artist I can reach my fans directly, they know where to find me.

You did movie soundtracks in the past (The Dewey Cox Story, Get Him to The Greek, That Thing You Do etc.). It’s surely fun to write lyrics like Furry Walls or African Child, is it? I loved the performance of Furry Walls at the end of the movie (the beginning is incredibly funny)!
As much as I love all the records of Aldous Snow (except the one before his creative hiatus – that was crap… ;-): Is there a chance we will ever listen to these songs with Mike Viola on vocals?

Hem. I just did a tour with Adam Schlesinger where we played a bunch of songs from the movies we've worked on. There are demo recordings of me singing every song from the movies I've worked on and also songs that didn’t make it. For Greek I think Dan Bern and I wrote close to 30 songs.

What do you think about your early songs nowadays (MV & the Bottom Line, MV & Snap, Kenmore Square…)? Is there a song you like in particular?

Oh that stuff is terrible. BUT, there are some earlier songs and recordings of mine that are really inspired naive and punk rock. I'm going to release some of that hopefully this year on 7".
But SNAP was horrible and the records we made are even worse than what we sounded like live. One thing we could do was harmonize really good though. I miss that.  We drank tons of beer, harmonized and played darts. Okay there's a few songs I like. I think there's so much memory wrapped up in those songs so it's hard to tell if I really hate them or I just hated who I was when I was making them. But I'm pretty sure I hate them.
at February 11, 2018