Mike Viola: Electro De Perfecto. Ten tacks. And a quite new direction. It's not like its forerunner Lurch at all. 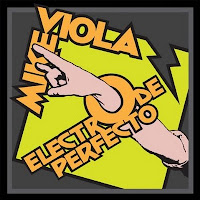 2. Get You Back: I demand this to be a single, played by all radio stations. My daughter (18 months old) loves it, too.

3. El Mundo De Perfecto: For me it's the central song of the whole record. Wonderful.


4. Soundtrack Of My Summer: I listen to this song for a while now (it surfaced a while ago on soundcloud). It was the soundtrack of my summer!

8. Here's The Rub: Stuck in my head. Immediately. Be careful!

9. Inside Out: At the moment my least favorite song on the album (but this changes after every listen - in a positive way. How do you do this, Mike?)

10. When The Stars Are Against You: A strong closing of the album. I love the vibe.

It's out in digital form, the physical record (CD and vinyl) will be released on 4th of October. You can preorder it at Amazon worldwide (US, UK, DE).