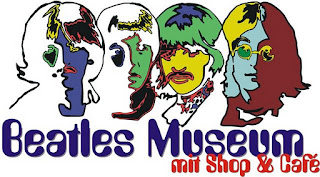 Now for some advertising for my hometown Halle an der Saale: The city has the privilege to present visitors The Beatles Museum, it's only some minutes to walk from the birthplace of Georg Friedrich Händel. The house itself was built in 1708 and restored in 1999.

The museum offers more than 2500 exhibits including rarities, curiosities and known stuff of the Beatles era (until 1970) and solo stuff (1970 until now). The complete musical development of the band with words, sounds and pictures.
Almost every room has a sound station or movies.

Three floors which are fully packed (no exaggeration!) with everything you need to get back to these days: first gigs in Liverpool, photos and autographs from the Hamburg era, rare vinyl, posters and also a fully equipped Beatles Rock Band to play Beatles songs as a full band.

The founder of the museum has excellent relations to Beatles surroundings: Beatles-photographer Astrid Kirchherr contributed photos of her private archives and Heinz Edelmann - main designer of the movie Yellow Submarine - draw a littles sequel especially for the museum.

Here are some impressions of the exhibition:

The Official Museum page and shop (sadly only in German - but I could help you there ;-) is HERE.

Email ThisBlogThis!Share to TwitterShare to FacebookShare to Pinterest
Labels: Beatles