Some days ago I stumbled upon the name Jeremy Messersmith. (Thank you Brandon!)
He is an indie pop musician from Minneapolis. 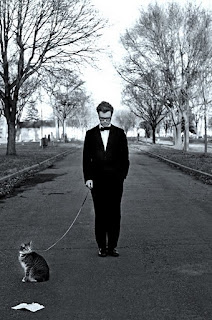 Let's see what the press says:
"It's hard to listen to The Silver City, the new CD from Minnesota chamber-pop artist Jeremy Messersmith, without thinking of Sufjan Stevens. Both artists have strikingly similar voices and a love of richly orchestrated story songs." -NPR Second Stage

"Imagine Elliott Smith driving in a convertible, the wind flying through his hair, singing about sadness and somehow creating joy enough to forget his troubles for a while." -The Onion

"His second album, The Silver City (...) is a breathtaking work of craftsmanship and heart. Picking up where his delicate and profound debut The Alcatraz Kid left off, The Silver City adds layers of instrumentation and harmonies to Messersmith's signature gentle croon. (...) Critics are calling the Dan Wilson-produced Silver City a "love letter to the Twin Cities" and "perhaps the best local album of the year." - Citypages

You can listen to all three records on Bandcamp - and also buy them (like I did instantly, and I don't do this very often).