She & Him is a duo of Zooey Deschanel and M. Ward. The band released two records: Volume One and Volume Two (BTW, I like these titles!). 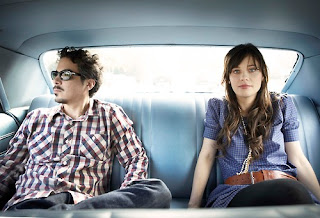 Deschanel and Ward first met on the set of the film The Go-Getter, in which she had a starring role. They sang a duet together.
Deschanel had done years' worth of home demos. After meeting M. Ward she decided to send them to him. Ward called her a short time later, telling her that he would like to record her songs properly, and the band She & Him was formed.
By the way, both LPs are available as as a very nice vinyl edition.

Songs for a lonely island
Volume One: Sentimental Heart, This Is Not a Test, Sweet Darlin'
Volume Two: Thieves, In the Sun, Lingering Still, Don't Look Back

Finally, a video for the song "Don't Look Back":

Email ThisBlogThis!Share to TwitterShare to FacebookShare to Pinterest
Labels: M. Ward, She And Him, Zoey Deschanel