Yes, Rooney. Again. Solo Record. Again. This time it's Taylor Locke. Seriously: The band members of Rooney seemed to be very productive in 2010. Rooney with their latest album "Eureka", Ned Brower with his solo record "Great To Say Hello" and finally Taylor Locke & The Roughs with "Grain & Grape" and "Marathon". Yes. Two records. In one year. Both are just great. 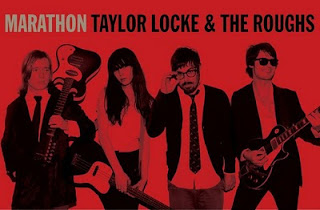 Taylor Locke & The Roughs - Grain & Grape:
The album opens with "Start Me Over" and "Jennifer" - two straight rock song (and i like them a lot!). "Joy" reminds me of ELO & Bleu, "Amnesia" is upbeat & catchy while "What Have I Done?" is my favorite of the whole album. And so we are at record no. 2:

Taylor Locke & The Roughs - Marathon:
The brilliant opener "The Honor Role" is minioperaesque* in tradition of "Bohemian Rhapsody" or "Band On The Run", while "Jenny" and "tarred, feathered & scarlet lettered" are straight rock songs. "Don't Forget" reminds me of Queen & ELO (or LEO ...) - I confess, I like the "wooo-hoo". "My Only Drug" along with "One More Time" are no less than perfect radio singles (which can still be a good thing these days).
"Sleeping with the enemy" is like listening to a good Def Leppard song (do I hear "Loud Lion" here?).

So thank you Rooney for 2010 - what a surprise! Just one thing: bring Bleu and/or Mike Viola with on your next tour to us in Germany (like the "Ménage A Tour 2011". The people here don't know what they are missing :-)

* checked Google: the word "minioperaesque" wasn't used before. I claim copyright for this :-)