Naubinway - the first solo record of Minneapolis music legend Adam Levy (best known from The Honeydogs) - will be out in September 2015.

Ben Folds - So There

Ben Folds teams uo with yMusic and will release his new album "So There" in September 2015.
Interesting fact: there are only 8 tracks - and a 21 minute long orchestral piece ("Concerto For Piano and Orchestra"). 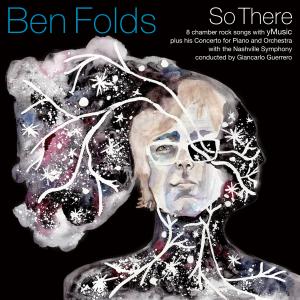 Darwin Deez is back. Yay! His third record "Double Down" is out September 18, 2015.
Listen to the first single "Kill your Attitude" here:

The newest release of the London based label Lojinx looks - and you can count this as an understatement - very promising!
Serious Poke is the debut album from Fred Abbott (lead guitarist and keyboard player from Noah and the Whale). The record will be out July 24, 2015. Listen here:


Brandon says: "It was in a small two bedroom condo on Louise Street in Glendale, California that the story of Crayons & Angels began. In the healing shadow of a life changing illness I started writing and recording an album called Dandelion. That album featured music that ended up being little meditations, reflecting back on the immediate past of those years.
But there were other songs that started to emerge at the same time. Songs that felt very different, that played through the darkness more like a celebration of spirit. They've been kicking around ever since, waiting for the right record to shine. These are the songs that inform the heart of Crayons & Angels. If Louise Street is where this album started, Kickstarter is where the record begins a new chapter. And this chapter is all yours.
I'm so proud to be partnering with my dear friend Andrew Curry and our friends at Curry Cuts to bring this record to you. This is without question my most ambitious project to date, an 18 track record of songs that span the stylistic scope of my whole catalog. Working on this project was truly a celebration.
And to get this one fully across the finish line we need YOUR help. Crayons & Angels is yours now. From the bottom of my heart, thank you SO much for all your support, love and friendship."
at July 14, 2015