Now something from a new band : Identical Suns.

Identical Suns began as a conversation. One afternoon in September, 2013, founding members Todd Stanton and Rene Rodriguez starting talking about writing songs. Todd and Rene had become online friends as part of a Mike Viola group on Facebook in mid-2012. The group was started up around Mike Viola’s performances on a online website called StageIt.com. It was soon discovered that this group had a lot of musicians as members and it was decided that those who were interested would start hosting their own online shows, as a warm-up for the Mike Viola shows. With encouragement from Mike, the shows included covers of Viola songs and, toward the middle of 2013, Mike devised a series of shows for the various musicians to play one side of a Beatles album. 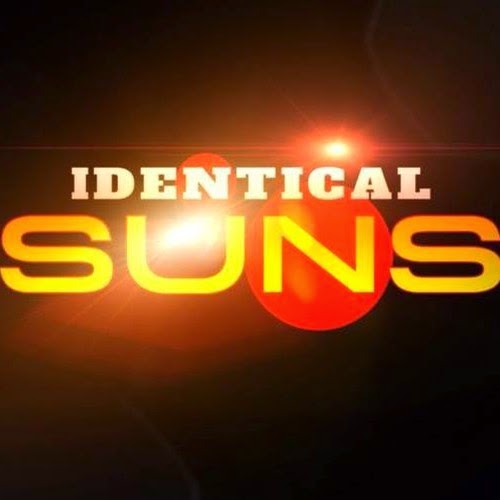 Todd and his family began to play shows (as the Stantones) and Rene played as a solo artist. In August 2013, Rene went out to visit Todd and his family in Ohio. They got along instantly, even though they had never met in person, they felt like they had known each other for a long time and became even better friends. One evening, Rene was asked by Adam Waltamire of Pop Garden Radio to consider playing at a Rick Nelson Tribute Show in early 2014. Rene was concerned because he was basically a cover artist, no longer writing songs of his own. He felt that he needed at least a couple of originals to play at the show. That afternoon in September 2013, Rene expressed this concern to Todd Stanton. Todd suggested that they should write some songs, Rene agreed.

One of the initial concepts of the group was that there would be no genre involved here. Identical Suns wasn’t going to be a Power Pop group who would strive to sound like any other group. They don’t set out trying to sound like ELO or The Beatles or Beach Boys, etc. They are only interested in where the song takes them, where the lyrics go and each member plays their part in this creation. Some songs have required a serious discussion of the subject of the song - who is this person in the song, where are they in their lives?

In early 2014, Todd, Andrew and the family came out to California to join Rene at the Rick Nelson show that started the iSuns project. It was an adventure. This would be the first time that the group would play these songs together, and in just a few hours. Despite of all their worries about the performance, everything went well. A huge relief. Exactly two weeks later, Rene flew out to Ohio to hang out with Todd for a few days. They played a show on StageIt but only wrote one song.

At this time, the group has eight completed songs (with the inclusion of the Rick Nelson cover “Just Take A Moment”). The songs are “Baby, I’m Down”, “Nothing I Can Do”, Coulda Sent A Reminder”, “Show Me A Sign”, “Yesterday Ended At Midnight”, “E.M.I.L.Y.” and “Common Ground”.
Special guest Christian Phillips of Sonic Executive Sessions contributed the background vocals on “Common Ground.” Ultimately, Identical Suns is a group who are actively engaged in the fun and enjoyment of writing and recording music. The only goal is having the songs speak for themselves, letting whichever process works at that moment, and being open to inspiration. The experience has been positive and the results speak for themselves.

PowerPopSquare had a short Q&A with Todd and Rene from Identical Suns:

PPS: How did you guys come together?

Rene: Todd and I met online through the Mike Viola StageIt Superfan Page. We didn't know each other before that and we started talking over all the stuff going on in that page, then we decided to make some music.

Todd: Like Rene said, thru the Mike Viola Weirdo group. At one point, some of the instrument/artist inclined members of the group (actually I think Mick Morris was the one to suggest it) decided we should do Stageit shows when Mike was taking a break. That was fun. I actually got to organize it. We actually wound up doing a total of 3 series of Weirdo Stageit shows. This gave me an opportunity to deal with each of the MV fans a little closer. Rene and I emailed back and forth, and at one point spoke on the phone. And we became good friends.
Then later, Adam Waltemire, also apart of the MV group) was so impressed with Rene's Stageit show that he invited him to play at a "festival" for the Spring of 2014. Rene called me up and said we should write some material for him to play. That triggered the birth of Identical Suns! We both had pieces and parts of songs that never came to fruition As of today's date we have 8 songs written and recorded.

PPS: What are your musical inspiration and your influences?

Todd: I never listened to much anything popular growing up. My mother didn't want us kids listening to the sexually -or- drug suggestive themes of much of the late 60s/early 70s music, so my brother and I listened to a stack of Dad's old 45s. None of which really stuck with me. Then in the early 80s, I started listened to radio. It was such a mess of music then, sappy love themes, crappy disco, and the dying embers of 70s rock bands filled the air. I would record music off the radio that did grab me though. Songs like 'Take it to the limit" by the Eagles, "Shake It Baby" by Ian Matthews. "Le Freak" by Chic.
My first albums purchased though were ELO's "Greatest Hits" -and- Bob Seger's "Nine Tonight".
A few years later I met a friend, Dave Rybaczewski. He learned I played piano, and asked if I wanted to record on a song he was writing. That began my road to writing music. We wrote 5 albums worth of music under a band name called 'Complexcity". Dave was into all kinds of 60s and 70s music. It was thru him I learned about bands like Genesis, Yes, and the Beatles. That coupled with the era of MTV, I now was knee deep into a wide range of pop/rock music. As I continued to write music, I started writing/recording music on my own. I recorded 4 albums worth of music from 1998-2005. During that time period, I was really into groups like Billy Joel, Foo Fighters, Boston, Radiohead, Jeff Lynne, Ben Folds, World Party and especially Jellyfish.
These days groups like Mike Viola, Bleu, David Myhr and a renewed interest in the Rembrandts (the pre-Friends era).

Rene: My musical inspirations and influences are all over the place. I grew up in the 70s and 80s so I love those cheesy pop songs especially from the 70s. I also love the Beatles and the Beach Boys. I have been a Beach Boys fan since I was really young and started listening to the Beatles around 1976.

PPS: What would you choose: mp3? CD? Vinyl? Cassette?

Rene: I like CDs and Vinyl. I use MP3s for simplicity but I still have some cassettes kicking around. I did experiment with recording on my small tape recorder, using the small, built-in microphone instead of my regular mic. I really like the lo-fi quality of that recording. Those old cassettes are great to have around.

Todd: Media? I'm going to be hated for this, but....
I'm a realistic/practical guy. MP3s... all the way. Not even iPod formatted music files. I like control over my music. I like to play them anywhere, share them with anyone, listen to them on whatever I want.
Vinyl, I'm sorry, is just not practical. It's cute it's trying to make a "come back", but it's a fad. My son Andrew, loves the novelty of it, but he doesn't own a turntable and probably never will. Why? It's impractical. To have a collection, requires room. I was into cassettes (mid 80s) then CDs (90s) but have since pitched the cassettes, and boxed the CDs.

PPS: Will there ever be a Star Wars song? (Todd is a big Star Wars fan)

Todd: Yes.... I wrote one years ago: "THENNA" When the prequels were coming out, and the internet was still in its infancy, there was a short lived rumor that Luke and Leia's mother was named 'Thenna". So I wrote a song about her.
Years later after I wrote it, another local band covered it when they played out. That was the coolest thing, hearing someone else play your song. :-)
Here is that song: https://soundcloud.com/toddstanton75/thenna
Not sure I would do another one though. Everyone knows I love Star Wars... too much. I wouldn't want people to think I can't write about anything else (but maybe after writing 75+ songs in my life, maybe there's proof I can) :-)

Rene: Hmm, I'm not sure. We never really plan out the subject for a song we have written, or we haven't so far. We have talked and discussed the subject matter after the fact but not in advance. I guess we won't know until it happens. We'll let you know.

Rene: Well, that's a tough one. One of them would probably be the Beach Boys "Sunflower" because it's such a great album. Another one would be the Beach Boys album "Holland", one of my favorite songs is "Leaving This Town", but the whole album is fantastic. Lastly, I'd pick the Beatles "White Album", mostly for its diversity. There's always something on there to make you feel good.

Todd: This type of question has been around a long time. I think the origin of it would have to do with when music wasn't portable. So its hard to answer that question without first saying "Why can't I just bring my MP3s?" .... but I understand the substance....
I have always joked with my kids that they need to know from memory one of two albums before they move out of the house. "52nd Street" by Billy Joel -and- "Live Bullet" by Bob Seger...so maybe those two.
Lastly, I guess it would be a toss up between "Split Milk" by Jellyfish -and- The White Album (I agree with Rene on that one). God... there's always "OK Computer" by Radiohead....
Why can't I just bring my MP3s?