In 2013 Mike Viola released a new album .... Well, sort of....
GHOUL is not a traditional record, it consists of trading cards!

It worked like this: GHOUL is a very limited edition set of 24 collectible cards. Each card contains autobiographical stories written by Mike Viola and a download code for an exclusive unreleased song. You can buy a pack for 5 USD. Each pack contains 5 cards - which means also 5 songs.

You may get doubles, and this is good because: You can trade them (see the links below)!
GHOUL is a project by Mike Viola and Steve Loter (an American director and producer known for "The Ren and Stimpy Show" or "The Penguins of Madagascar"). 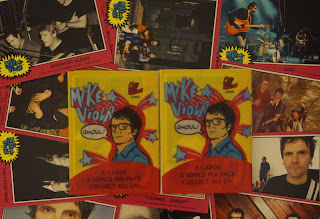 I won't go into details regarding the songs, just some facts: If you have all the cards you'll get a 24 track record (!), consisting of almost completely new songs. There are five tracks from the unreleased COZY record, three cover versions and sixteen further new songs.
There is so much good stuff in there - just to name a few: Tonight, Rock'n'Roll Denny's, Moving Forward, Time For Everything To Change (with Kelly Jones), She Thinks She's In Love ...
It could easily have been two completely new records - and it's my power pop / indie pop record of the year 2013!

Trade the cards at www.facebook.com/groups/ghoulcards
at February 15, 2020