It's a rare feeling to listen to a record for the first time and being sure that this piece of music is special. So very special it won't leave you alone for quite a while. Two days ago this happened to me with Daft Punk. 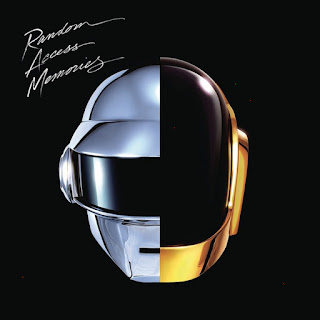 Daft Punk is a duo of the musicians Guy-Manuel de Homem-Christo and Thomas Bangalter from France, which tend to refuse to fit in a single genre: house, synthpop, disco, funk, dance music - just to name a few.
Their first hit was Around The World from their debut album Homework in 1997.
I was never really interested in their music until Discovery in 1999, which really impressed me.

Now, in 2013 Daft Punk is back with Random Access Memories.
So, you may ask "Why is this review here?". Because of a simple reason: it may be my personal album of the decade (at least til today).
Random Access Memories is a kind of a hybrid: a reminiscence to history of music and futuristic sounds that could already be found on Daft Punk's Discovery record.
Bangalter explains the reasoning behind the record name: "We were drawing a parallel between the brain and the hard drive – the random way that memories are stored."
You can describe Random Access Memories best with a journey through music. Despite heavy use of vocoders and synths it has a warm sound, most of the record was recorded completely without samples.

Now for the songs:

The opening track Give Life Back to Music already combines a variety of musical influences: funk, guitars, disco and the well-known vocoder vocals.

Surprisingly the second track The Game of Love is laid-back. I'd say it's somewhere between the Discovery sound and the music of AIR.

Giorgio by Moroder starts with an excerpt from a monologue from Giorgio Moroder - an Italian composer and producer, also one of the inventers of the synthie-disco sound - describing his time in the 1969/1970 and his first contact with synthesizers.
Synthesizers, elements of house and funk, violins etc. are present and compact to an intense finale of this epic 9 minute track.

Within is again relaxed and has similarities to The Game of Love (not in a bad way).

After the first four songs I was already slightly impressed by Random Access Memories. But with the following songs Daft Punk blew me away:

Instant Crush. The song title says it all. I f**king love this song. It's so catchy.That's why I love music.

Touch starts slow and slightly strange, but when Paul Williams begins to sing, it caught me. His voice is beautiful and warm and enhances the song even more. Touch is filled with rhythm changes - it's like a journey. Impressive!

Get Lucky (featuring Pharrell Williams and Nile Rodgers) is the first radio single and a straight Daft Punk - Funk song, similar to Lose Yourself to Dance. A perfect choice to represent the record.

The intro of Beyond would perfectly fit in a science-fiction movie. Along with the next two songs it slows down the tempo of Random Access Memories.

The instrumental Motherhood is kind of an ambient track, and it's certainly not the well-known Daft Punk sound. But it fits perfectly here.

Fragments of Time features Todd Edwards on vocals. A strong radio friendly track.
The traditional Daft Punk sound shines through at Doin’ It Right. A simple but catchy song.

The epic track Contact closes the record, it may be one of the best closing tracks ever. The Kubrik-esque space atmosphere is real - you hear a sample from the Apollo 17's captain Eugene Cernan from the moon before starting back to earth. Drums, organs and electric guitars accelerate into a fulminant finale.

After 74 minutes the journey is over.
I really hope we don't have to wait eight more years for the next record!