2013 starts with a blast of a discovery - The Candle Thieves!

The Candle Thieves is the brainchild of two serious songwriters, who wear big, thick-framed glasses, walk out onto the stage to the sound of the Jaws theme tune, set off bubble machines, and play glockenspiels, toy pianos, shakers and snares.
They summon up the spirits of Eels, Sufjan Stevens, and the Lucksmiths in their sounds, but make wonderful songs that are utterly their own. 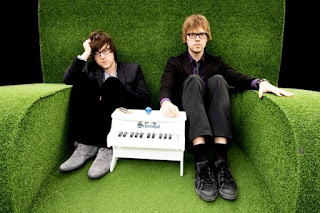 The Candle Thieves are Scott McEwan and the mysterious man who hides behind the moniker, The Glock.

"We had both been listening to songs that were very different to the music we made", explains McEwan. "We both like melancholy things that were happy on the surface, but more serious underneath – songs that weren't trying to be clever, but somehow said everything."

They named their band after The Glock's peculiar habit of stealing wax candles from wedding parties, many of which would fill the bedroom to which he had returned.
They started experimenting with new instruments, and found out there was something truthful and sweet about a man in his mid-20s pouring his heart out over a toy piano, or experimenting with gentle melodies on a Casio keyboard. They realised they could turn their little gigs into special events by handing out chocolates, setting off party poppers – and then shifting people's expectations by singing songs about nightmares and acute anxieties.

I wholeheartedly recommend both of their full length records. Listen to this! Start here:

Email ThisBlogThis!Share to TwitterShare to FacebookShare to Pinterest
Labels: The Candle Thieves