Kelly Jones, known for her stellar record SheBANG! from 2008 (which was produced by Mike Viola) and the Melon EP (2010) returns this Christmas with the single Kissing Santa On Christmas Eve. 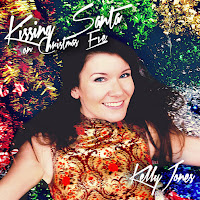 The song is an instant classic. Kelly is featured on vocals and glockenspiel, along with Mike Viola (guitars, bass, keyboards, also he produced the song), Eric  Summer (strings) and Scott Seiver (drums).
Kissing Santa On Christmas Eve is available online (amazon.com and  iTunes) December 4th, 2012.

You won't be disappointed - it is a perfect christmas song!

Kelly is also featured in the Bleusikal - the short musical for To Hell With You - the new record by Bleu (see my last post).