Farrah is a independent British band pending between indie rock and pure melodic pop. They released four records in the last ten years, toured in Europe and Japan. 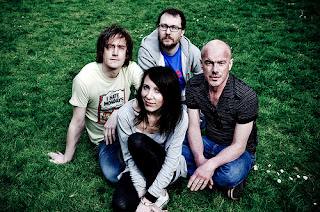 Singer Jez Ashurst: “We’re confusing, I think, and hard to categorise – and a lot of people like to categorise bands. We’ve always recorded, produced and owned our records, plus we make our own videos as well, so we’re as ‘indie’ as you can get. Yet we try to create polished, ageless music you might think sounds like it couldn't have come from a punk or DIY aesthetic. People sometimes say we sound ‘too commercial’ – as though these two things are mutually exclusive. We just make the music we like.”

I recommend listening to their last self titled LP Farrah. All twelve songs are high class, melodic and beautiful pieces of a great record:

Email ThisBlogThis!Share to TwitterShare to FacebookShare to Pinterest
Labels: Farrah