Marc Martel, known for his astonishing Freddie Mercury-esque vocals, takes a surprising approach on his new Christmas offering. Aptly named, The Silent Night EP, it serves as a refreshing addition to a chill evening get-together with family and friends. 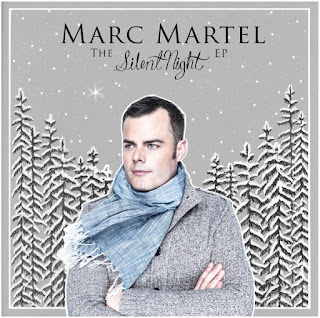 The EP sets a distinct singer-songwriter-meets-synth-pop feel, and is full of moments that would cause anyone to stop and listen. The title track is almost theatrical in its stark acappella intro, conjuring the image of Martel standing in some remote snow-blanketed forest, while singing the most familiar Christmas carol of all-time.
Melancholy classics like "O Come Emmanuel" and "In The Bleak Midwinter" also stand out as emotional piano-driven ballads where Martel's refined instinct for preserving a song's fundamental core, while giving it his own artistic arrangement, shines. Grammy award winning guitar and banjo virtuoso, Ron Block (Alison Krauss & Union Station), brings his brand of Tennessee bluegrass to Martel's sound on "What Child Is This?" The track list contains a cohesive selection of 5 traditional Christmas classics, including "O Holy Night," but also gives us a novel take on Martel's own "How Many Kings".