The Cry! - Dangerous Game + Interview with the band (update)

The second studio album by The Cry! is called Dangerous Game and will be released on March 1, 2014 (CD/Vinyl/Digital). 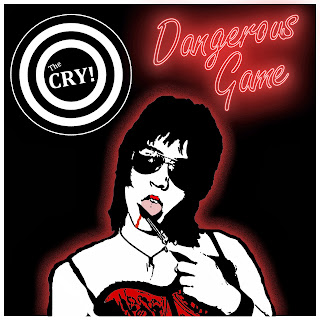 With upbeat songs full of pure energy, catchy guitar riffs and harmonies The Cry! are a reminiscence to the 50s, 60s and 70s. But they are surely more than that!
You'll instantly recognize their influences like The Beach Boys, Exploding Hearts and The Sweet. The band brings back Rock'n'Roll, Power Pop, Glam and Punk, which makes them timeless.


The band was so kind to have a Q&A with PowerPopSquare:

The Cry!: Well, I (Ray) wanted to start a Rock ‘n’ Roll band so I wrote some songs. I tried to get Brian Crace, a guitar player I’d heard about, to join but he thought we (drummer Johnny Martinez and I) were kind of losers. I got him to come over to the house one night and we got drunk, egged some houses and bonded. Honestly, that was the beginning of The CRY!
We went out around Portland (OR) looking for a strong bass player that could sing and eventually found Dave (Berkham) playing guitar and fronting his band “Midnight Callers.” We were so impressed that we immediately asked him if he played bass and would help us record a few songs.
At first Dave thought we were losers too but we convinced him to track a few songs with us. In January 2011 we went into Fetish Pop studios in Portland and laid down seven tunes: Waiting Around, I Think I’m In Love, Be True, Such a Bore, Sleeping Alone, I Wanna Know and a cover of Herman’s Hermits Henry IIIV.
Recording went pretty well but when we first sat down heard the playback of our vocals, with backgrounds and all, we knew we had something special. Since that day it’s been CRY! Or DIE!

PPS: Was it difficult to record album #2?

The Cry!: Writing the songs was (and is) the easy part. Dave, Brian and I write a lot of songs so materials were pretty easy to come by. But still this was a much harder record to make. This record took almost two years to complete for a few reasons.
Our first record got a lot of great press and sold a gang of copies well. We knew we had to at least match that effort and really wanted to outdo it. I guess we had a bit of “sophomore blues.”
Next, we were spending all our money on touring (130 shows in 2012), and had no money for recording (Dave is the only one with a “real” job). Probably the biggest thing was that we when got together to record we just started partying too hard and fucking around like mates do.
Finally, we got focused in the summer of 2013. Our drummer, Evan “Maus” Mersky, was starting up a recording outfit called “Red Lantern Studios” He offered to record/engineer at all hours of day and night when the studio didn’t have paying customers. So we did a day here and a week there until the tracking was done. We finished mixing in October of 2013.

PPS: Why do you think vinyl has this huge comeback particularly these days?

The Cry!: Don’t know about other kids but I’m sick and tired of this digital shit. Digital is convenient and great sound quality but is kind of an empty experience. I want something to touch and look at. A vinyl record is more like a keepsake and playing a record is like a ritual event. For me, putting vinyl on the player, hearing the scratches, looking at the pictures and liner notes is kind of a religious thing.

PPS: Who was the last artist or band that took you by surprise?

The Cry!: The new Justin Bieber 7” really got me off…NOT! Seriously, I got to give a shout-out to Wyldlife. There new record is killer. Their songs remind me of how The CRY! lives and that’s what great music does. Tuck (Biters) produced their last record “Time Has Come To Rock & Roll” and it’s a smasher. They are one of our favorite bands these days and we’d love to work with all those guys soon.

PPS: Do you think the internet is good or bad for musicians/bands?

The Cry!: It’s both good and bad. It’s good because it levels the creative playing field and allows more players create solid tracks and get their shit out there to be heard. The CRY! would never have been able to make records or videos without digital tools and the internet.
We do a lot of Facebook, ReverbNation, YouTube etc… On the other hand, it’s bad cause it make it crazy hard for new artists to make money. We are broker than shit… but we look good and have great fans.

PPS: Which genre do you mostly relate to with?

The Cry!: We don’t like being lumped into one or the other. We are obviously influenced a lot by power pop with heavy punk and do wop trimmings.
Honestly, in the end, its only Rock & Roll and we like it!

Email ThisBlogThis!Share to TwitterShare to FacebookShare to Pinterest
Labels: The Cry