Sweet Diss And The Comebacks is a band from Washington State. Their new record Emerald City Love Song has just been released...
Wait a second - 'Band' isn't quite the right word: Vocals, instruments, mixing, and mastering was done by Nathan Reinauer (with a very few exceptions). To say that this is an impressive effort would be an understatement. 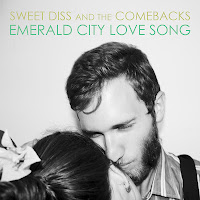 Emerald City Love Song is in the spirit of The Beatles, The Beach Boys, Jellyfish, Harry Nilsson, Queen, Roger Joseph Manning Jr., The Merrymakers and Seth Swirsky (The Red Button). To compare one artist with other artists is somehow delicate, but I think Nathan is in a very good company with these musicians.

The whole record is very positive - and it's a joy to listen (in a similar way with David Myhr's Soundshine). The opener Twenty-Something starts with an a cappella - with breathtaking harmonies. You Make My Day is PowerPop at perfection. Maybe Someday and Hey Indie Girl are incredibly catchy. And Seattle's Best, a five part song with a length of more than 12 minutes, created goose bumps when I first listened to it (at the end of part four) - it still does.

Nathan - thanks for this record. So, where to get the Japanese CD? Gotta start searching!

For more information, a link to the Japanese version of the album (which has four bonus tracks), the iTunes link and much more visit the Official Website!

Nathan thankfully also did a Q & A with PowerPopSquare:
Which artist or band would you like to see live but it's not possible anymore?
I want to say The Beatles when they were playing around with their later material in the studio, but that's kind of a cheat. I would have killed to see Jellyfish, Sugarbomb, Merrymakers... the list is too long (which is kind of depressing).

Which record grew the most for you (first you didn't like it at all, now it's one of you favorites)?
Back to Jellyfish again! Both of their albums had to do a little growing on me. When I first got into power pop, I kept hearing about how great Spilt Milk was, but the samples I heard didn't click with me for some reason. I gave it a second chance later and was completely blown away, and now it's probably in my top 5 favorite albums. After that, I tried to get into Bellybutton, but it seemed too tame compared to the insane pop piñata of Spilt Milk. It wasn't until fairly recently that I discovered how great that one is in its own right.

If you were to be stranded on a desert island what five records would you take with you?
Now I actually have to put my money where my mouth is and come up with a Top  5?

"Spilt Milk" by Jellyfish
"SMiLE" by Brian Wilson
"Magical Mystery Tour" by the Beatles
"Solid State Warrior" by Roger Joseph Manning, Jr.
Either "Rockin' the Suburbs" or "Songs For Silverman" by Ben Folds

Those aren't necessarily my favorites, but it's a good mix of things I love listening to and things I feel I can learn a lot from.

What was the golden era for pop music (The 60s/70s, The 80s/90s or 2000 - today) - and why?
It'd be easy to say the 60s/70s and call it good, but that's probably too simple. There have been tons of insanely great pop since then, even if it's not in the mainstream. Although I guess the fact that great pop WAS the mainstream in the 60s and 70s means it really WAS the golden era. I'm probably overthinking this...

Which artists formed your musical direction?
The Beatles, Green Day, and the Monkees, weirdly enough. When I was growing up my dad would play a lot of Beatles records and my mom would play a lot of Monkees, and those things together made me develop an insatiable desire for adventurous, stupidly catchy pop music. When I was a little older, my brother would blast early Green Day albums in the room next to mine and I fell in love with short, high energy rock songs, too.

What was it like to release your record "Emerald City Love Song"?
It's been a really great experience! I'd been sitting for years in my bedroom studio churning out songs sporadically that no one would hear, waiting for the right time to get serious and put a full album out there. One day I realized there was no "right" or "wrong" time, and that I was an idiot for not releasing anything yet. So I did! I wasn't sure what was going to happen, but the whole experience has been so ridiculously fun and satisfying and I've learned so much that I'm literally already demoing songs for a second album as we speak. (But it's gonna be quite a while, so please still buy the current one!)

Email ThisBlogThis!Share to TwitterShare to FacebookShare to Pinterest
Labels: Sweet Diss And The Comebacks