Bleu in the UK and The Kickstarter Campaign

His kickstarter campaign to promote (or better to collect money to promote) his new album "Four" is still running for one month. The aim (8000$) was reached within 12 hours! Now it's at 27.000$ and rising!

A new band on the horizon - Oranjuly. 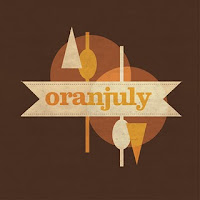 Their self titled debut album is on sale now. Listen to the songs on their official site.
I won't mention Jellyfish now ... although it would be right ... but I won't.
at July 31, 2010