May I introduce you to ... Mark Bacino

To let him talk for himself - Mark Bacino says: "I’m an American singer/songwriter, producer, multi-instrumentalist born and raised in New York City".

Bacino's official debut, Pop Job…the long player! a great collection of carefree pop music (in a positive way!) was released in 1997. The album was promoted in NYCs "The Living Room" (still hope to get there when my daughter is old enough to travel long distances and gets interested in good music... *ahem*).
The second album, The Million Dollar Milkshake followed in 2003. 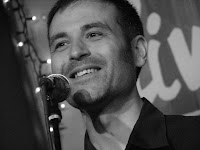 In May 2010 Bacino's third album Queens English was released.
All Music Guide descibes it as an album that "proves it's possible to introduce actual maturity into pop with no adverse effects". Bacino says "it’s sort of a melancholy love-letter to NYC and specifically life in the outer-boroughs".

But lets listen to what the man himself has to say:


Discography:
If you like the new CD buy it. Just one suggestion from me: if you buy it, do it via CDBaby (the link above) - the shipment email alone is it worth it to buy from them (but I won't tell you more!).